Wrap Them in Love


John Leslie Mumford, "Old Pa", was born on December 15, 1922 in Cleveland, Ohio. His father was a conductor for the New York Central Railroad and when John was less than 6 months old, his father was transferred to Indianapolis, Indiana, where John remained for the remainder of his life.

John begain working and saving money at the age of 14, doing any odd jobs he could find and delivering groceries all over the eastern side of Indianapolis. He graduated from high school at age 17 and decided all those savings could afford him a wonderful adventure.

He cleaned out his savings, bought a secondhand motorcycle and set off to tour the United States. At the end of 8 months, he had seen about all that he cared so he headed home. Somewhere in the midwest, under a blanket of stars, John decided it was time he stepped forward and did his patriotic duty. Upon return home to Indianapolis, he enlisted in the United States Navy, right in the middle of World War II.

With his adept ability and agility with machinery, John was placed into the Construction Batallion as a heavy equipment operator and stationed on Solomon Island. John's biggest claim to fame is the design of the Construction Batallion logo. Lying in his bunker one night, John envisioned a CB in another light, a Sea Bee. He drew a bumble bee wearing a sailor's white folded hat and carrying a machine gun and tools in the eight legs.

It took no time for his batallion to "adopt" the little bee and within months, he was paid by the United States Navy for full rights to the design of the Sea Bee. The design has not changed and is used to this day to represent the Construction Batallion of the US Navy.

John came home from the war and married a local cutie, Joyce. She was the counter girl at the local diner and the two of them had four sons. They remained married until she died in 1996.

Old Pa was a kind and giving man who was a gentleman but also a gentle man. He loved God, his family and his country. He did whatever was needed to assure that his family was cared for to the best of his ability. 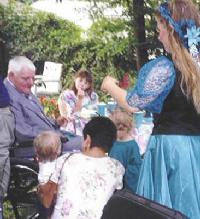 He had a major stroke in 1988 which left him with no speech, and no use of his right side. Although he had physical limitatins, there was never a time when his love did not shine through completely. He welcomed everyone that entered his home and enjoyed sharing time with his family and friends.

On April 2, 2001, God decided that Old Pa had earned his reward and he went to sleep in the arms of Jesus. Though he will be missed, the love he imparted while on this earth will live on in our hearts and memories.